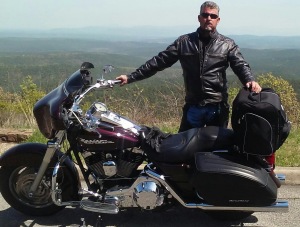 Darrell Lee Pierce, the middle son of three boys born to Don E. and Karen Lee Pierce, came into this world on August 6th 1967 in Oklahoma City and finally lost his fight with the demons he’d been battling for far too long on June 24th, 2021.
Darrell was a beloved son, brother, brother-in-law, uncle, friend and most importantly, the cherished father to his only daughter, Morgan Lindsey.

Darrell was to all who knew him, a conflict of personality and his family and close friends liked to tease him that while some people can be a little prickly, he could be an entire cactus when he was in the wrong mood, but everyone that knew Darrell, also knew him to be one of the most charming, witty and endearing people you would ever meet when he was in the right mindset!

Darrell followed his beloved father Don into the carpentry business and was a master carpenter and craftsman, working with his dad Don, his cousin Russell and uncle Gene Pierce for several years before he started his own construction business, Darrell Pierce Construction in 1994 which he operated until very recently when COVID related difficulties impacted his business severely.

Besides being a master carpenter, Darrell was also an extremely talented athlete in his younger days! Darrell was a very capable baseball player throughout his youth, and as good as he was as a ballplayer, Darrell was even more accomplished as a motorcycle racer, having won the first three sanctioned motocross races he competed in as a teenager, and enjoying much more success in that endeavor over the years!

As impressive as Darrell’s talents were as a ballplayer and motocross racer, his most amazing athletic talent was easily his ability to water ski! Darrell learned to water ski at only six years old and went on to become an extremely talented slalom skier, trick skier and even an exceptional wakeboarder in his later years! He was fearless in his willingness to try new tricks and was an extremely accomplished knee boarder completing flips & rolls with ease!

Most incredibly and despite not having access to a competition level tow boat, Darrell self taught himself to barefoot ski behind an 85 horse outboard motor! His endurance and stamina were without peer and he would often ski for more than an hour at a time, leaving those waiting their turn, to marvel at his skill and wondering if they were even going to get to ski before dark!

Darrell always enjoyed riding motorcycles throughout his life and after acquiring the first of his two HD motorcycles, he rode his cherished 2005 HD Road King over 80 thousand miles, traveling throughout the contiguous United States on it!

Darrell accomplished many things over his life and enjoyed many other endeavors including spending time with his daughter Morgan, his family and friends in his RV and beautiful boat at lake Eufaula, racing his mini-sprint car around the Midwest, spending time with and training the many German shepherd’s that he had and loved, riding his motorcycle with his friends in the motorcycle community and running his business which had grown to double digit employees at one point over the years.

Darrell was also a very accomplished outdoorsman, so much so that he was often teased by his brother that he had been born 100 years too late, that he should have been born in 1867! Everyone that knew Darrell could easily imagine him as a frontiersman or fur trapper, subsisting solely on his ingenuity, creativity and outdoor capabilities in the Wild West! Darrell loved to archery hunt for deer or turkey whenever he could, and he was a very savvy campfire cook, creating delicious meals from any game that he might take!

Darrell was proceeded in death by his parents, mother Karen and father Don, and the love of his life and first wife, Brandi Pierce. Darrell is survived by his beloved daughter Morgan of Tulsa, his older brother Rick and sister-in-law Deana of OKC, his younger brother Skip and sister-in-law Olivia of Macomb, OK.

Darrell will be missed by his immediate family as well as the many aunts, uncles and cousins of his large extended family and the volumes of friends from his many interests and experiences over the years! Darrell knew many many people from his childhood, his school days, his many construction friends and peers as well as the many friends he had in the motorcycle community that he enjoyed spending time and riding with in recent years.

Lastly, Darrell’s family would like to extend a heartfelt thank you and our sincere appreciation to the people that continued to try to help Darrell over the last few difficult months of his life. While his pride and his stubbornness prevented him from asking for help or accepting the help he was repeatedly offered, there is comfort in the knowledge that while he was in a lonely and dark place, he was not alone, with kind and generous people offering him friendship, food, shelter and the opportunity to make a change if and when he was ready and for that we are eternally grateful.

To send flowers to the family or plant a tree in memory of Darrell Lee Pierce, please visit our floral store.

You can still show your support by sending flowers directly to the family, or by planting a memorial tree in the memory of Darrell Lee Pierce
Share a memory
© 2021 OK Cremation & Funeral Home, LLC.. All Rights Reserved. Funeral Home website by CFS & TA | Terms of Use | Privacy Policy